Honestly, I can see why Clay Travis would make this remark. Now I am not saying what he said was brilliant. I found the comment to be kinda stupid and not related to the main topic. But I see a few reason for the comment.

Clay Travis and myself believe in the principle, ‘Any press is good press’. Howard Stern made it in radio with said crude comments and holding funerals for rival radio shows. When Stern would say something off color people would talk about it or write about it. After someone read about Stern’s crude remark, they would turn on the radio to hear Stern’s show for themselves.

Clay Travis knew if he said something remotely offensive on CNN the left wing journalists would write their take. If CNN and the left wing media freaked out then right wing media (Daily Wire, Daily Caller, and Fox News) would give their opinion. In the process Clay Travis will write a blog post on Outkick The Coverage about his reasons for the comment. The blog post will generate more clicks than an average post because his comment was on a bigger platform and the viewership of CNN typically would not listen to Travis in the morning or read his website. Travis will be laughing all the way to the bank with his ad revenue.

Also I would say Travis wanted to say boobs on the Clinton News Network just to see chaos unfold. Brooke Baldwin didn’t even know how to react when Clay Travis said boobs.

I honestly have never seen a brain go into a pretzel to that level other than in Ben Shapiro Thug Life Compilations or guests on Tucker Carlson Tonight. Clay Travis completely stopped the interview in its tracks.

“I only believe in two things completely, the First Amendment and boobs” 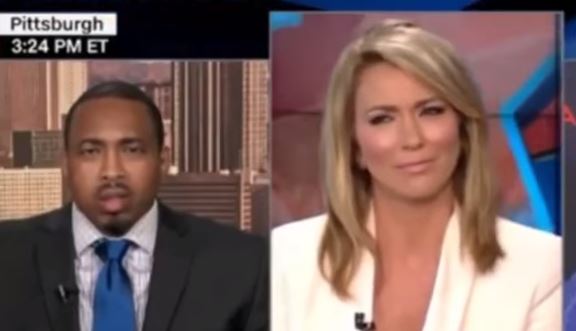 People, we are looking at the best example of a ‘what the fuck?’ moment.

Again as I said I love two things here… Clay Travis using the ‘any press is good press’ principle and CNN going full triggered mode. But there is one problem with the comment, the delivery. When he said the line it just felt awkward. The comment felt so awkward it was almost cringe worthy. The only saving grace of the comment not being completely cringe worthy was CNN’s reaction. Now if Travis would have worked on the delivery I would be writing a completely different blog. I would be in full blown ‘In The Pursuit To End The Pussification Of America’ mode. But I’m not. I am trying to break down the comment, showing the effects it will have, why Travis said the comment, and the positives and negatives of the comment. I don’t like doing that shit. This blog feels dry to me. Breaking everything down is for professional journalists, not for a blogger with below average writing skills with the only saving grace is a joke about vegans, snowflakes, or liberals.

See this is my problem with Clay Travis, he will do something I like (turn CNN’s brain into a pretzel) but he never gets the job completely done. There is always something missing. He is always missing one piece in the puzzle to join my ‘Snowflake Destroyer Club For The Politically Incorrect’. It seems like Clay Travis is stuck between being a serious media personality or a politically incorrect media personality. I’m not saying someone can’t be serious and politcally incorrect at the same time but Clay Travis approaches his media persona with a shtick.

If Clay Travis wants to take his talents to the next level he needs figure out his direction.

On The Pursuit To End The Pussification Of America